The History of Use of Gemstones 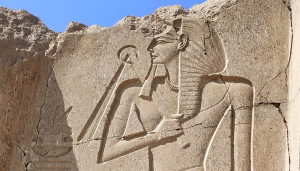 The use of gemstones dates back over many centuries and civilizations. Throughout history they have long been used for their healing properties and as the pillar of many spiritual & religious systems. Their purpose was quite versatile - from being used as a symbol of status to a tool to commune with the gods and everything in between.

The first mention of crystals can be found in ancient texts and illustrations from the Sumerians in Mesopotamia, dating all the way back to 4000 BCE. Here, the Sumerians would use crystals as a canvas, inscribing and depicting important life events, including births, deaths & marriages, into the stone. Kind of like a visual gemstone diary. These were safely kept in temples and places of worship because they held significant value to the community. When diving into the history of gemstones, we were fascinated to learn that there has been documentation found from this time in which crystals were used as ingredients in “magic formulas” to summon the gods. We’re not entirely sure what the other parts of this “formula” entailed, however it’s clear that the crystals played an important role in rituals of this sort.

The use of gemstones in Ancient Egypt was documented shortly after the Sumerians. The Egyptians were fans of the stones because they acted as one of the primary ways to connect to their revered gods and goddesses. They relied heavily on the crystals for their spiritual healing properties and to balance, what is known today as, the chakras. For royals; crowns, armlets & jewelry were often designed with stones of all kinds. Here, the crystals symbolized status, wealth, and were thought to be tokens of protection, preventing harm to the wearer. When buried, it was not uncommon for Egyptians to be laid to rest with crystals (in specific clear quartz) in their tombs & on their foreheads. This was said to help provide safe passage into the next life.

You may be familiar with the modern trend of ‘crystal water’, which consists of putting charged crystals at the bottom of a glass to infuse the water with various healing properties. Well, like most things throughout history, the Egyptians did it first. They would create elixirs out of crystals and drink it, in the hopes of being cured of their physical ailments and as a way to, once again, connect with their deities.

Crystals continued to be used, and even researched, in the Middle Ages (around 300 CE) where they were commonly used in medical practice to ward off illness and support mental wellbeing. Stones would be placed externally on various organs to provide relief from suffering.

Gemstones have been around for ages and while we still have so much to learn about these incredible crystals, it is certain that the healing properties and high vibrational frequencies they carry have been felt throughout the history of time. We feel so grateful for their presence and place in our lives.

For more information on the gemstones we use in our pieces and their energetic properties, check out our Gemstone page.